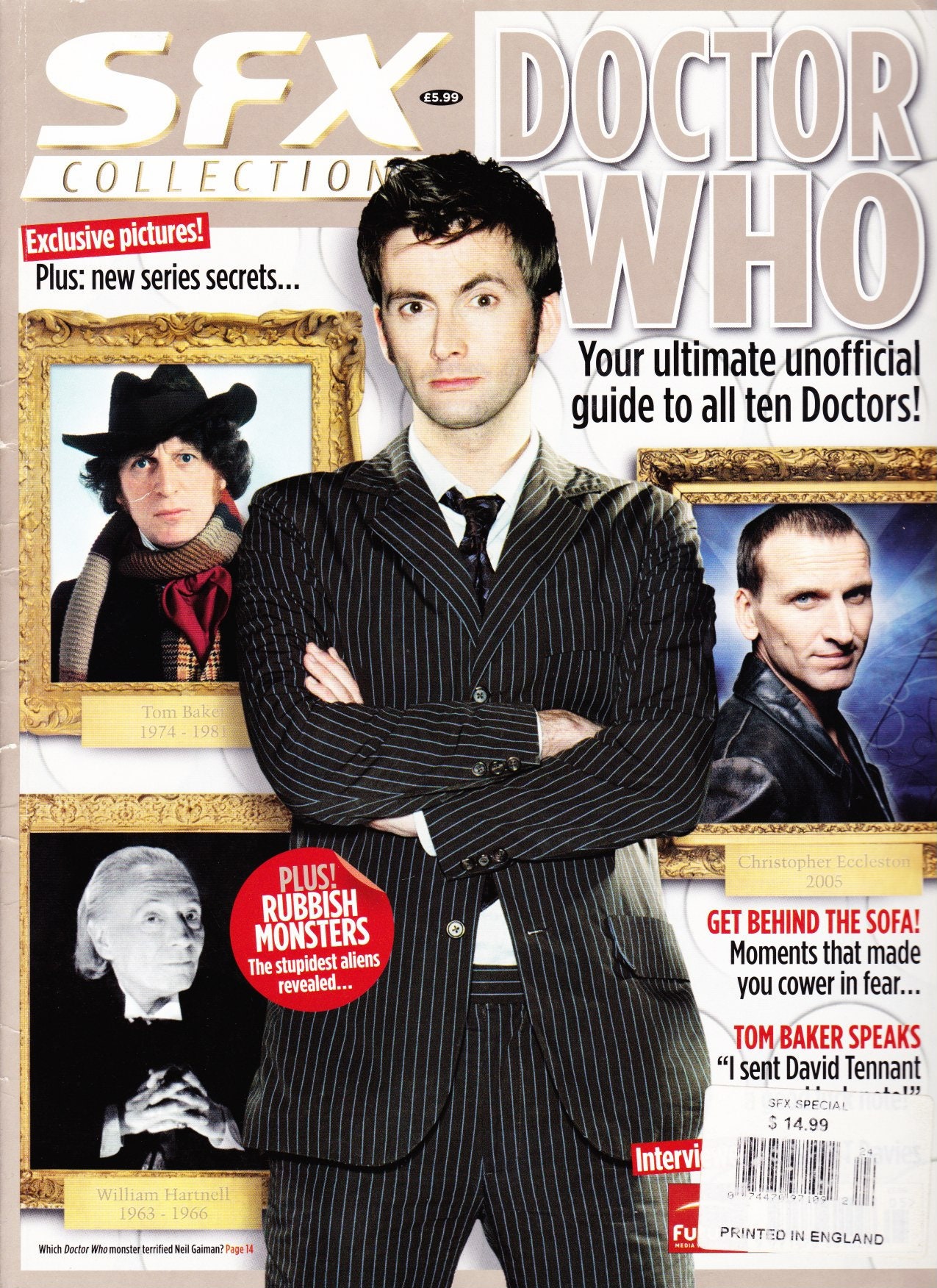 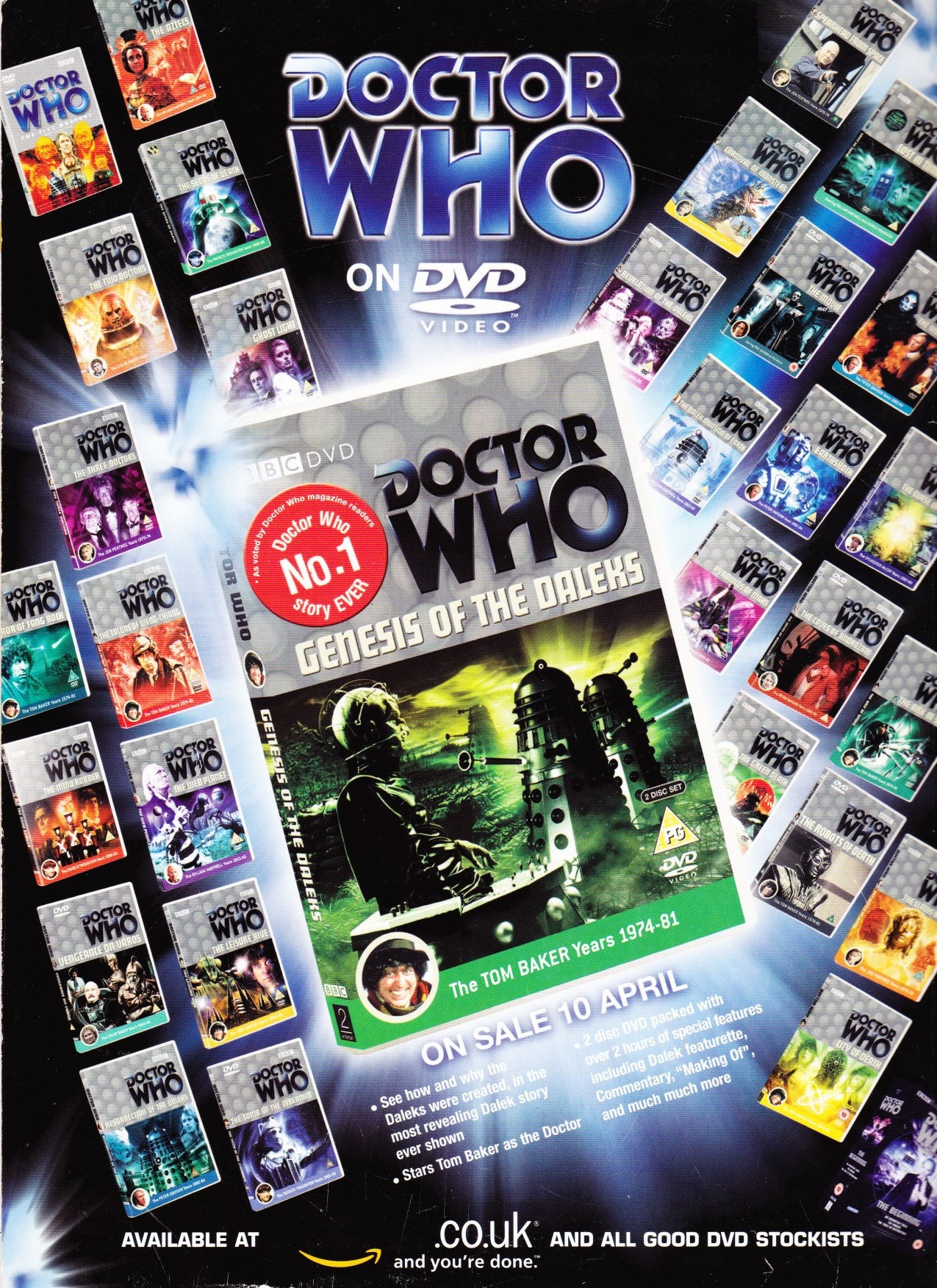 Featuring
Interview: Russell T Davies - Who's head honcho reflects on success.
Season Two - What to expect when the Doctor returns to our screens.
Behind the Sofa - "Oh no, I've wet myself!" Precious Who memories...
Subs - Never miss an issue of SFX.
Who History - Exploring a Time Lord's back pages.
William Hartnell - The original Doctor laid down the template for those who followed.
Interview: Anneke Wills - The Doctor's mid-'60s companion on fame, TV violence and... gardening.
Patrick Troughton - The Doctor reinvented as japing cosmic prankster.
Jon Pertwee - The most urbane man ever to helm the TARDIS.
Interview: Nicholas Courtney - Because it's time the Brigadier became Lord Lethbridge-Stewart of 'Tache...
Tom Baker - Mad, mad, mad. The quintessential Doctor?
Interview: Tom Baker - "I was thinking about your husband's codpiece this morning..."
City of Death - Young Parisians: recalling the making of a Tom Baker-era classic.
Peter Davison - It shouldn't happen to a vet, having to follow Tom Baker and all...
Interview: Terry Molloy - Meet the man who was Davros, creator of the dastardly Daleks.
Colin Baker - The Doctor saddled with the worst costume ever...
Sylvester McCoy - The Doctor becomes a sometimes sinister manipulator of people. Really.
Sophie Aldred - The Doctor's foxy companion as you've never seen her before...
Paul McGann - The action-man star of the ill-fated US movie.
What's Up Doc? - The making of the first 'toon Who, with Richard E Grant.
Christopher Eccleston - Our time-travelling friend from the north.
Carry On Again Doctor - Behind the scenes for the return of Who.
David Tennant - Dig the new breed. Doctor Who as a young charmer.
Interview: Phil Collinson - Let there be Cybermen! The Who producer on season two.
Interview: Camille Coduri - Rose's mum on the reinvention of Jackie.
Couch Potato - Does 'classic' Who still cut the mustard?
The Dalek Movies - Doctor Who goes big-screen in the mid-'60s.
The Daleks - The hidden history of the pepperpot meanies.
Invasion Earth! - An exclusive extract from top new book, The Science of Doctor Who.
Monstrously Bad - Rubbish Who monsters, a celebration.
So Much Time - It's not just the Doc who travels in the fourth dimension, y'know...
The Time Machine - Top SF author Stephen Baxter on HG Wells's classic tale.
The Time Tunnel - Naff '60s telly or underrated gem?
Back to the Future - Sooo '80s, but we love it. The making of Robert Zemeckis' classic.
Life On Mars - Take a look at the law man...
SFXperts - Your Who questions answered by those old enough to know better.
Vital Statistix - Who-themed lists for your delectation.