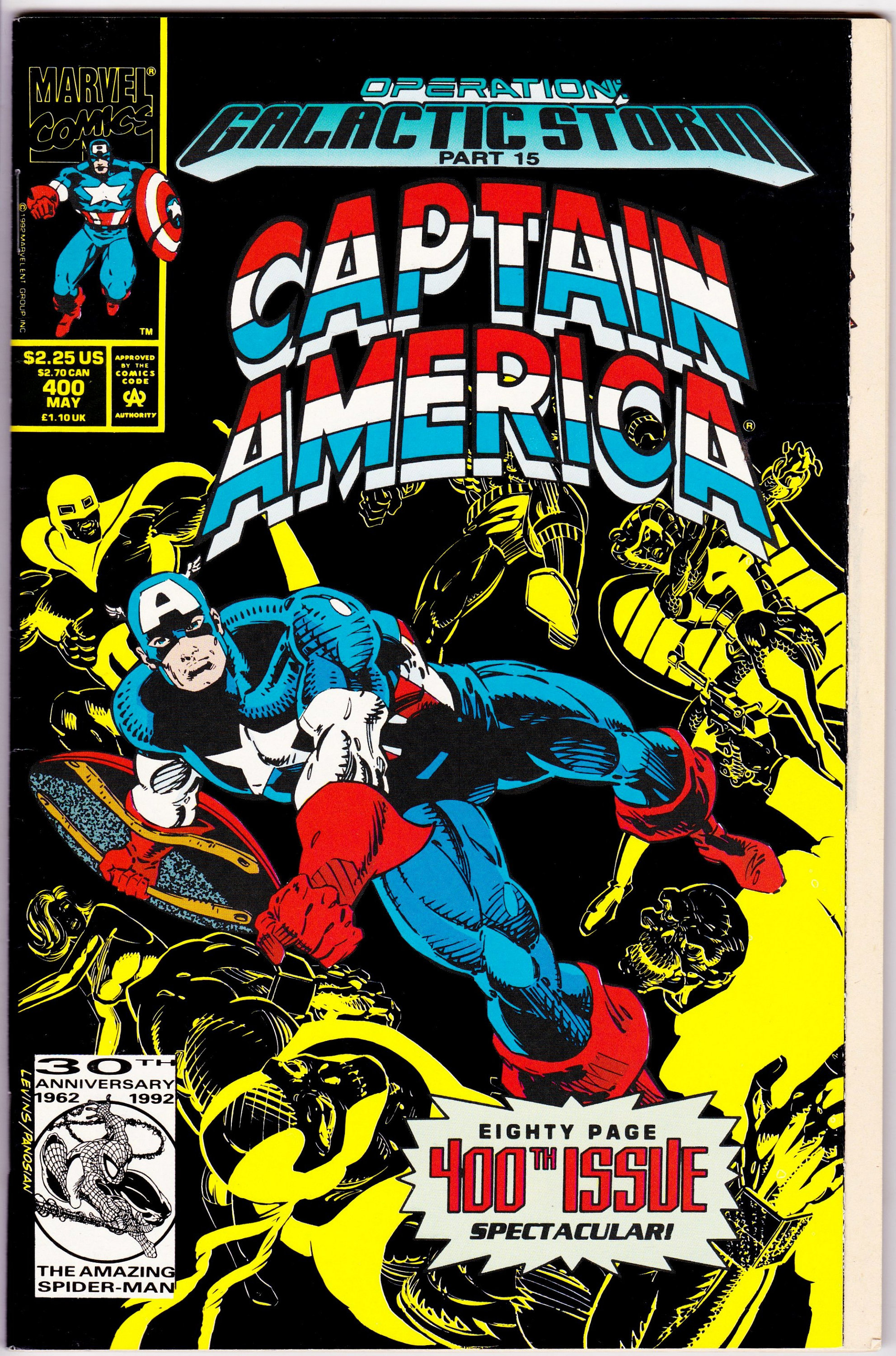 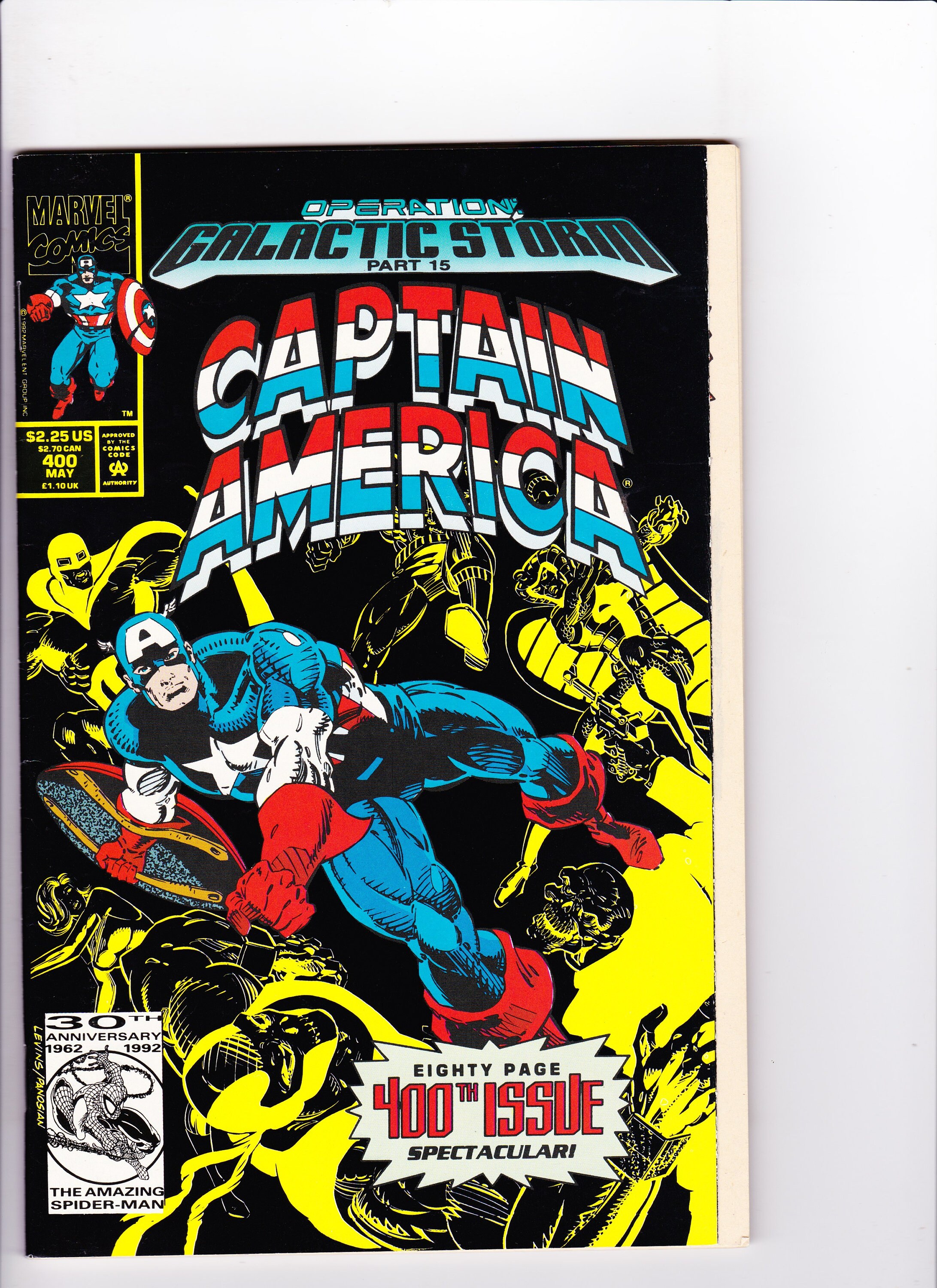 "Murder by Decree!" Operation: Galactic Storm Part 15 of 19:
Guest-starring the Avengers
Story continues from Thor 446 It's the 400th anniversary issue of Captain America! And the star-spangled avenger is in dire straits on Hala after his teammates shockingly abandoned him (in order to pursue the Nega-Bomb)! The Living Legend stands before the Supreme Intelligence expecting the worst…when suddenly the Cobra attacks! Hold on, how did the Cobra find his way to the Kree homeworld? There's no time for answers as Batroc strikes next! Then Flag-Smasher, Viper, Cross Bones, and the Red Skull! Six against one! Can the Sentinel of Liberty beat his six deadliest foes? And outsmart the Supreme Intelligence along the way? Story continues in Avengers West Coast 82. Cameo appearances by the Black Knight, Crystal, Goliath (aka Clint Barton), Hercules, Iron Man, and Sersi. Second Story: "Out in the Cold" Script by Mark Gruenwald. Pencils by Larry Alexander. Inks by Kathryn Bolinger. While serving as part of Earth's rearguard, the Falcon and the U.S. Agent respond to a challenge from Flag Smasher! The anarchist is holding D-Man hostage and demanding an audience with the red-white-and-blue avenger! But since Cap is on another world, Flag Smasher is going to have two heroes respond to his challenge instead of one! Cameo appearances by Gilgamesh, Hank Pym, Mockingbird, She-Hulk, Spider-Woman, and the Wasp. Third Story: "Crossing Back: The Origin of Diamondback!" Script by Mark Gruenwald. Pencils by Rik Levins. Inks by Dan Panosian. While being held prisoner by Cross Bones, Rachel Leighton recounts how it all began years ago. Reprint Story (flip-book): "Captain America Joins the Avengers!" Script by Stan Lee. Art by Jack Kirby. Reprint of Avengers (1st series) 4. (Notes: The front foldout cover features a full-page reprint of the cover to Captain America Comics 1 (1941) and quarter-page reprints of the covers to Captain America 100, 111, 132, 143, 188, 200, 228, and 241. The back cover features a reprint of the cover to Avengers 4. The back foldout cover features a full-page reprint of the cover to Tales of Suspense 58 and quarter-page reprints of the covers to Captain America 248, 254, 286, 300, 321, 332, 378, and 383.)

1st printing.
This comic book is in used condition. Comic is complete with cover and all pages attached. This comic has flaws that warrant a grade of NM.
Comic Book will be shipped bagged and boarded.