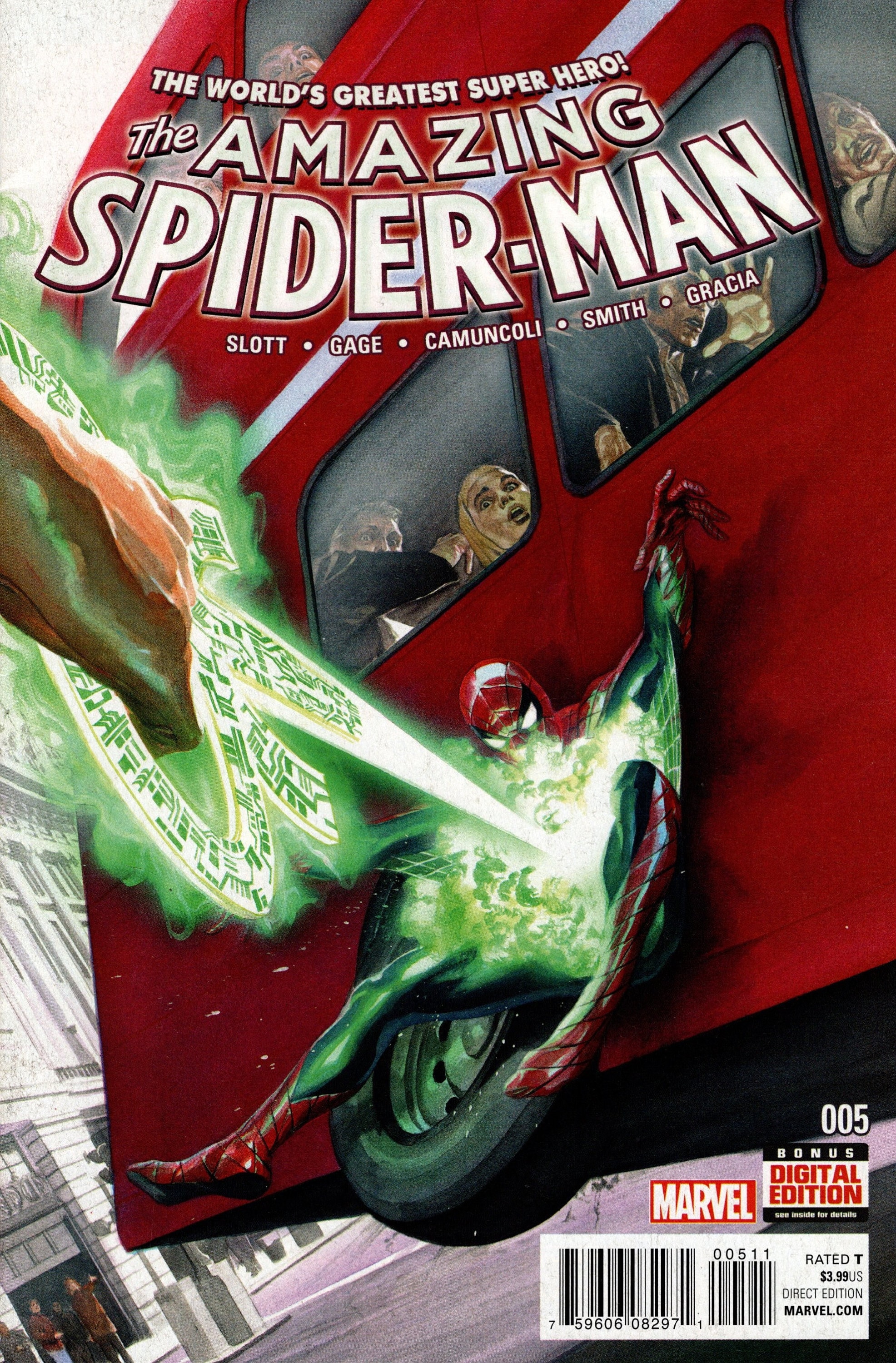 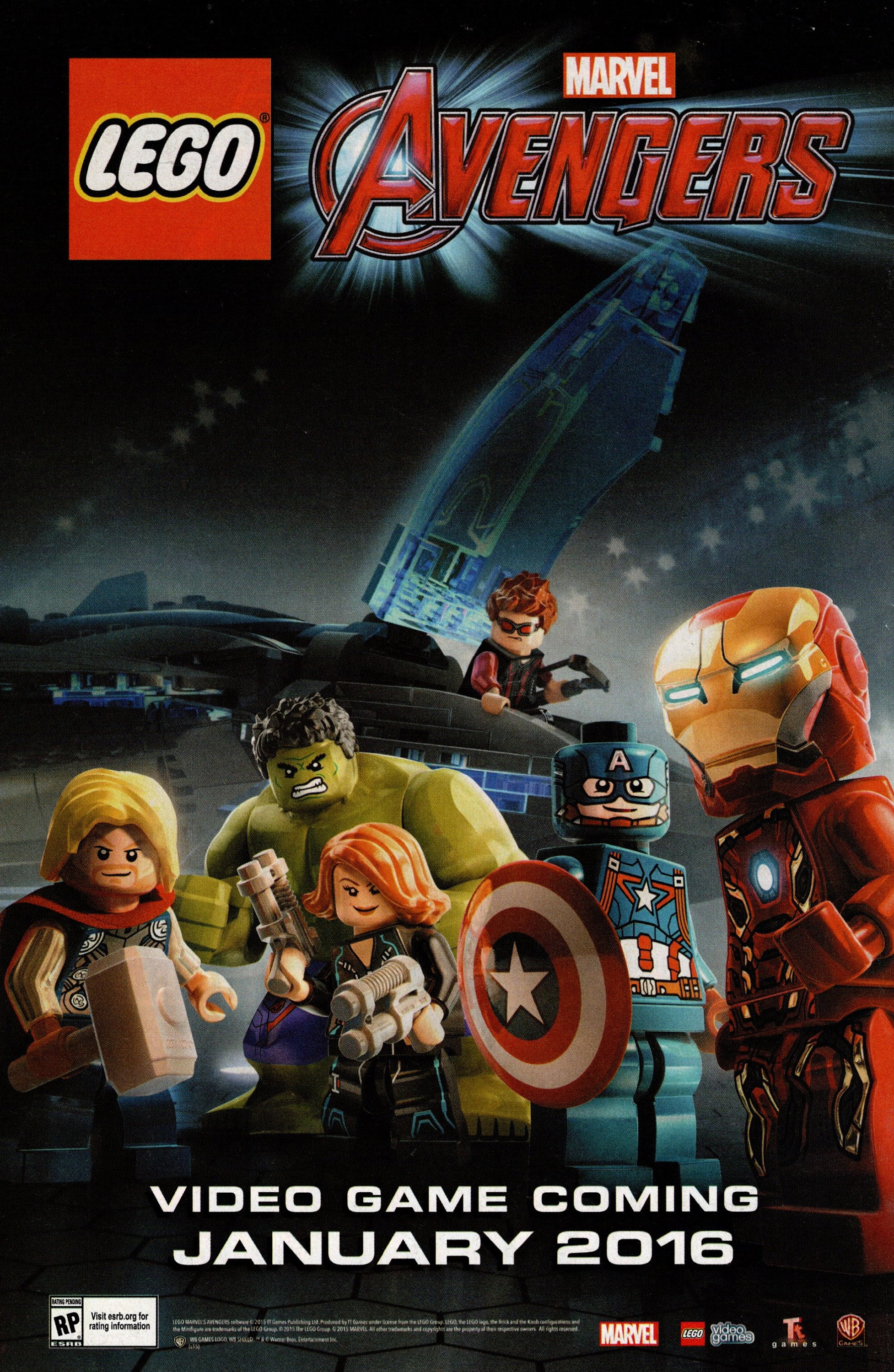 Written by Dan Slott and Christos Gage. Art by Giuseppe Camuncoli. Cover by Alex Ross. Not only has Spider-Man gone global - so have his enemies! Someone in Africa is masquerading as a member of the GOBLIN family! Where there's goblins, there's Spidey, and it's up to everyone's favorite wall-crawler to get to the bottom of what's going on! 28 pages, full color. Rated T

Human Torch: "Speaking of handling. Which of your finely tuned and expensive toys are we taking this time? The Spider-Copter? Spider-Cycle? Spider-Underground-Drill-Car?"

Spider-Man "We're in a city. With tall buildings. I'm taking the greatest Spidey vehicle of 'em all. Thwip thwip."

In Nadua, Spidey and Mockingbird leave in a borrowed Quinjet while S.H.I.E.L.D. agents take care of the clean-up. After Peter retracts his costume to his Webware, Bobbi tells him the S.H.I.E.L.D. attack is over by now. He says that they could still use the brightest of CEOs, earning him a punch in the face. Mockingbird says that while she admires that he decided to save his aunt, he forced her to drop the mission for it, too. Peter says he got it and goes through everything that happened with the Zodiac; they stole his tech and used it to hack S.H.I.E.L.D.'s security network, but he in turn tricked them into revealing the location of all their bases, most of which, it turns out, were fake. Looking at S.H.I.E.L.D.'s footage of the Zodiac mission for clues, he discovers that Zodiac got a second lag of their satellite feed, but then why have fake bases all over the world. Peter realizes that what Zodiac wanted was access to S.H.I.E.L.D.'s satellite scans, not their defenses, and that their fake bases are set like a search grid. When S.H.I.E.L.D. scanned them, Zodiac received the scan of the whole world, something only S.H.I.E.L.D. could do. He sees that the last place Zodiac looked at was London. Mockingbird tells Fury to bring all his forces to London and flies the Quinjet there.

Later, the Torch, Prowler and their S.H.I.E.L.D. teams arrive at London's Parker Industries building to be received by Sajani, Anna, Aiden and the Living Brain. Octavius' consciousness, still in the Brain, expresses anger over being forced to act like their lackey. Bobbi and Peter arrive, with Mockingbird making him apologize for having Spidey bail on them. He tells them they were played but they can still win and will need all their assets, guiding them to the conference room. Johnny, seeing Parker acting in charge, is left surprised. In the conference room, Peter suggests using London's camera network and his facial recognition software to find the Zodiac. Bobbi says that it will take time for them to be given access by the British government and Fury says that they were unable to take off Leo's mask, revealing that Scorpio killed him and asking Parker not to tell Spider-Man as they need him concentrated. Containing his shock for the news, Peter says that they don't need the Zodiac's faces as they like to go guns blazing and escape before they show up, so they need to know where they are the second they arrive. At the British Museum, Scorpio and the Zodiac storm the place, being spotted by a camera. Receiving the transmission, Fury sends the Prowler and S.H.I.E.L.D. there and tells Peter to call Spidey.

Once they are out of the room, Peter demands to know how they got the footage, as they weren't given clearance. They say that their nanotech was somehow released into London's CCTV network and interfaced with it. Improving it, reworked it and stole its data. This outrages Peter as P.I. isn't supposed to work outside the law but Johnny tells him that he needs to "call Spider-Man". Peter tells them to clean the CCTV of their nano tech and leaves, not noticing the Living Brain still on the background. At the vehicle hangar, Johnny expresses concern to Pete, but he says that he can handle it. The Torch then asks what Spider vehicle is he using this time, but he says that he is on a city now, so he can use his greatest vehicle, his old fashioned Web-Shooters. The Human Torch and Spidey catch on to S.H.I.E.L.D. in their flying cars and head to the Museum.

Meanwhile in the Museum, Scorpio is using the Zodiac Key to look for his price when Spider-Man, the Human Torch, Mockingbird and the Prowler crash through a window and the heroes and various S.H.I.E.L.D. agents fight Zodiac. Spidey and Mockingbird go after Scorpio but are stopped by Sagittarius, who is ironically using bow and arrows and claims to be the world's greatest archer. While Mockingbird takes care of him, Spidey confronts Scorpio, who destroys the Rosetta Stone and takes what's inside, a strange artifact with the Zodiac Key symbol. Scorpio tells him that the game is over now, meaning he has no use for his pawns and uses a Webware to activate the venom samples in all of the Zodiac members. Spidey jumps into action and manages to hit all of the Zodiac with the antidote before they die while Scorpio uses this to escape.

Latter at the Parker Industries building, Peter reveals that he tracked the infection of the CCTV to a camera outside of the residence of Sajani, who already conspired against him. He tells her that he is not buying her excuses, but her shares in the company and fires her. He appoints Anna head of their London facility, in case they're not shut down, that is, and goes to meet with the home secretary, still oblivious to Otto's conscience who smirks in the background. Later, Fury and Parker are giving a press conference. Fury says that thanks to P.I. they reduced a terrorist network to one rouge Agent, but Peter says that they hacked their network, so he will understand if they take legal action, offering a public apology. Later, in an apartment in Paris, Mr. Jacobs is talking to Peter via hologram. He tells Jacobs that as chief shareholder of Parker Industries, his reaction to the scandal will determine the reaction of many others and tríes to win his favor. But Jacobs tells him that he won't sell his shares and has faith in the company and its future, having hidden the artifact, the Zodiac Key and his Scorpio gear in a secret room. - Marvel Comics