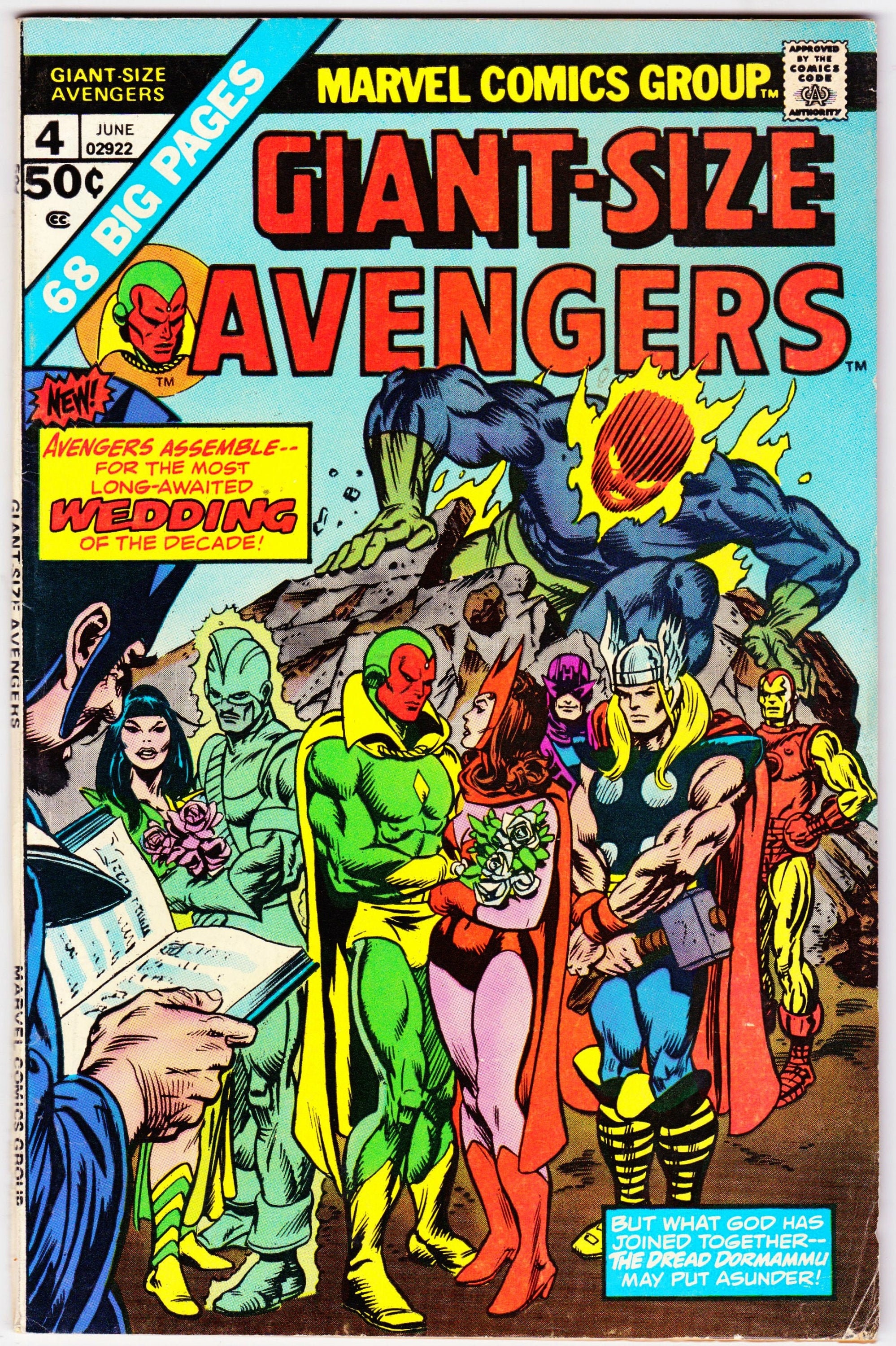 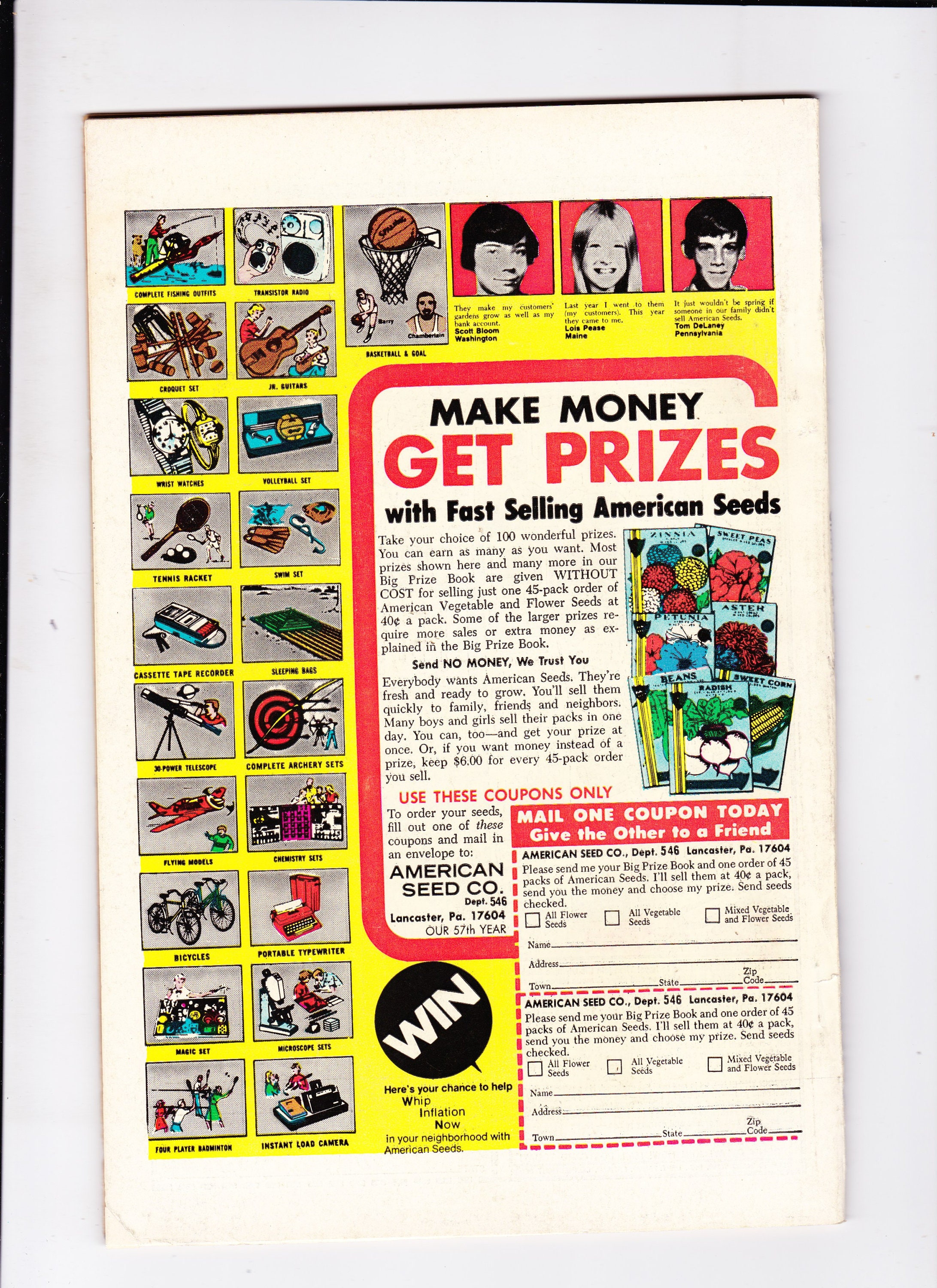 The wedding of the Vision and Scarlet Witch.

"Let All Men Bring Together!":
Story continues from Avengers 135. The Vision's quest through time to discover his origin is over. But instead of returning to Immortus' domain, the synthezoid avenger materializes at the center of the Earth! And shockingly the Dread Dormammu is there! With his captive…the Scarlet Witch! Wow, how did Wanda end up in the dreaded one's clutches? It doesn't matter now as the Vision must fight for the woman he loves! It's a supernatural showdown at Earth's core: The Vision, Scarlet Witch, and Agatha Harkness vs. the Dread Dormammu and Umar! Meanwhile in Vietnam, while the Cotati explains the mystery of the Celestial Madonna to Mantis and Moondragon; Hawkeye, Shell-Head, and the thunder god slip outside the temple and bump into the Titanic Three! However the three communist super-villains have been beaten badly! Who did this? Who else…but the Conqueror! And one more time, one final time, the assembled Avengers battle Kang…for the Celestial Madonna! An extraordinary ending for Earth's Mightiest Heroes! Cameo appearances by the Space Phantom, Crimson Dynamo, Radioactive Man, Titanium Man, and Gaea. Flashback cameos by the Swordsman, original Human Torch, and Ultron. Avengers Lineup: Hawkeye, Iron Man, Mantis, Scarlet Witch, Thor, and the Vision. First reprint story: "Betrayed by the Ants!" Plot by Stan Lee. Script by Larry Lieber. Pencils by Jack Kirby. Inks by Dick Ayers. The Ant-Man battles Egghead. Originally published in Tales to Astonish 38. Second reprint story: "Then Came…the Black Widow" Script by Gary Friedrich. Pencils by John Buscema. Inks by John Verpoorten. Originally published in Amazing Adventures 1 (2nd series). (Notes: This issue marks the end of the Celestial Madonna saga. Truly a bronze age masterpiece. Kang appears next in Avengers 141. Mantis does not return until many years later in Silver Surfer (2nd series) 3 & 4. The Vision and the Scarlet Witch first met in Avengers 76. Elements of this story overlap with Doctor Strange (1st series) 8. This issue was reprinted in 2005 in the trade paperback: Avengers…Vision and the Scarlet Witch. The letters page includes letters from comics publisher Dean Mullaney and comics artist Bill Blyberg, respectively.

1st printing.
This comic book is in used condition. Comic is complete with cover and all pages attached. This comic has a few flaws that warrant a VF grade.
Comic Book will be shipped bagged and boarded!